Good morning!  … this is Lucky. She is completely blind and beautiful. She is combining a very small snack of corn stalks with an exfoliation against the cement pillar. These pillars along with tall tree stumps are scattered throughout the sanctuary so the eles can relieve itches or do 5 – minute spas. 🙂

And this little guy climbed right into my lap this morning at breakfast.  I love his little motor mouth. 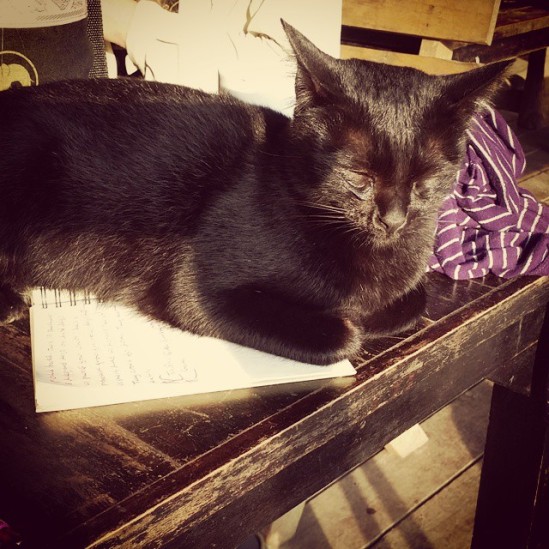 Navaan comes up for his early morning hello while his nannies get their warm blankets put on.  I love his little baby trunk on the platform. 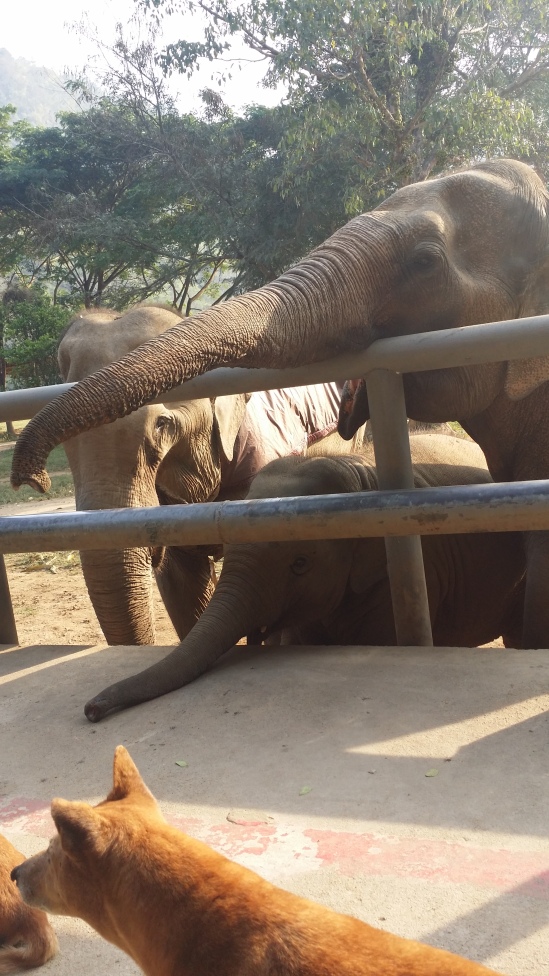 Navaan surrounded by his nannies 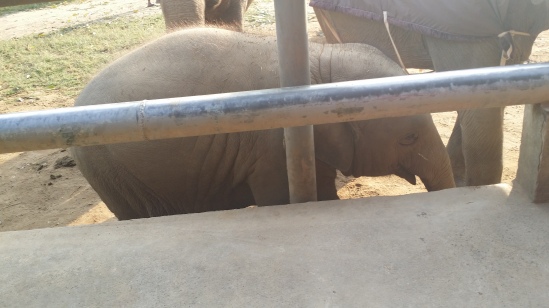 This morning, instead of doing steamed pumpkin, Jodi has us do elephant enrichment for Jungle Boy and Chang Yim in their HUGE enclosure.  We stuff 2 tires and set up corn stalks and branches into tee-pees.  This is is a lot of fun!  Tong Suk (Jungle Boy – 13 years old) and Chang Yim (6 years old) share this enclosure with Tong Suk teaching Chang Yim about being a bachelor, something that would occur naturally if they were not captive.

This is the morning crew, less Jodi who is up front in the truck with the driver.  And me, photographing the picture 🙂

Tong Suk and Chang Yim watch us carefully as we set up their area… eagerly waiting.

These are the creations we came up with for Tong Suk and Chang Yim: corn stalk tee-pees, stuffed tires.  Jodi told us later during lunch that they found everything we did within minutes and were thoroughly busy eating and playing.  Woohoo! 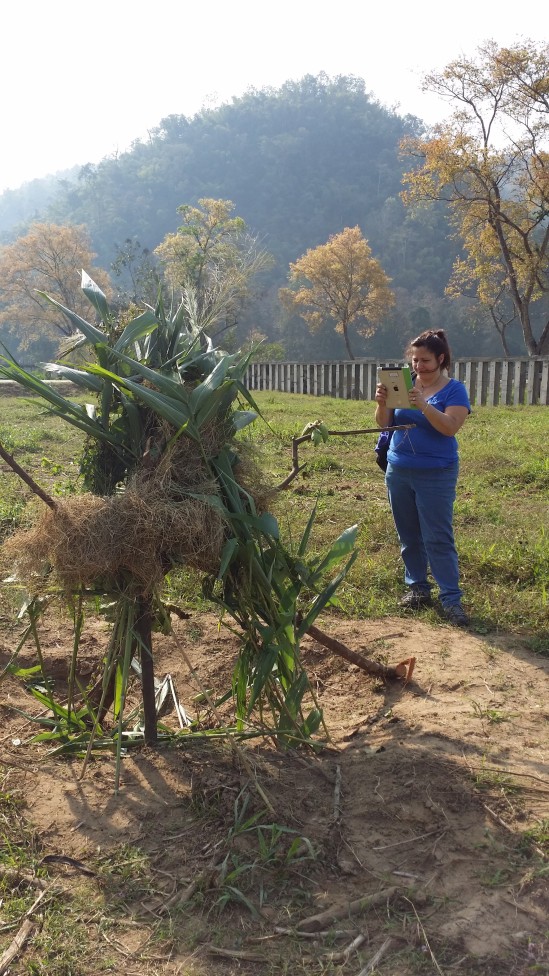 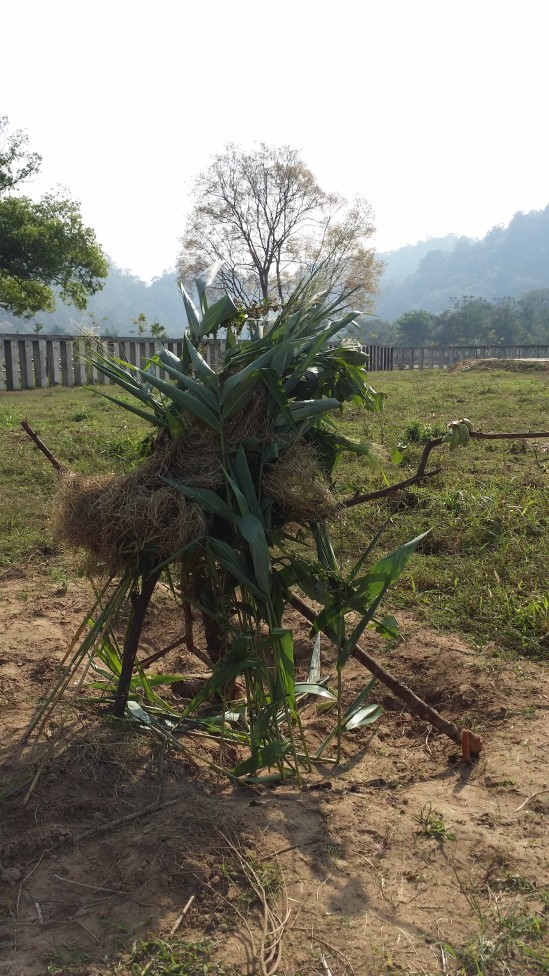 This is a quick shot of their built in pool.  It’s difficult to capture the sheer size of it but it is quite large and both Tong Suk and Chang Yim can be in it at the same time – probably about two more elephants with them if they wanted…)

On our way back, we get a quick sighting of Yindee with his nannies.  Look at the love and the trunk hugging. 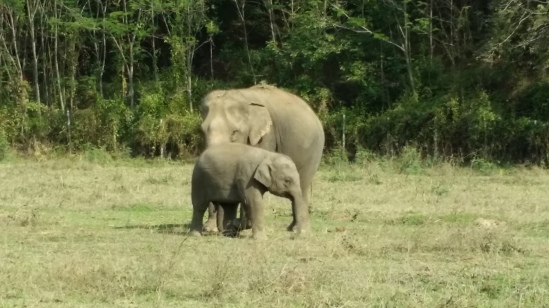 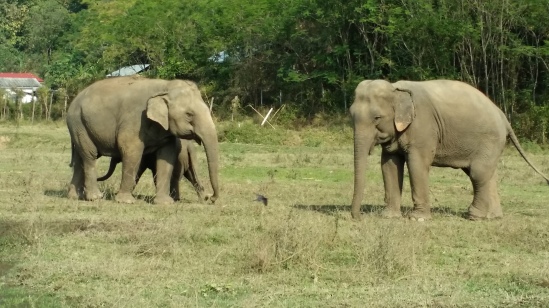 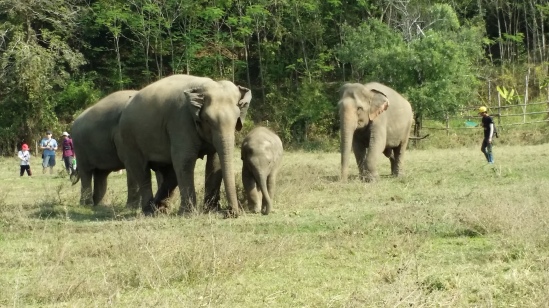 During lunch I see this sweet lady getting a good scratch on a cement pillar.  She has a very badly injured tight leg and moves quite slowly but she seems quite content here… 🙂

At 1 p.m. Sabine, Mel and I are ready to build the enrichment for the family herd enclosure.  Here are some of our efforts in the different shelters.  By the way, all of the shelters box surprise boxes filled with snacks.  Faa Sai’s is the largest box, of course.  We loved getting creative… 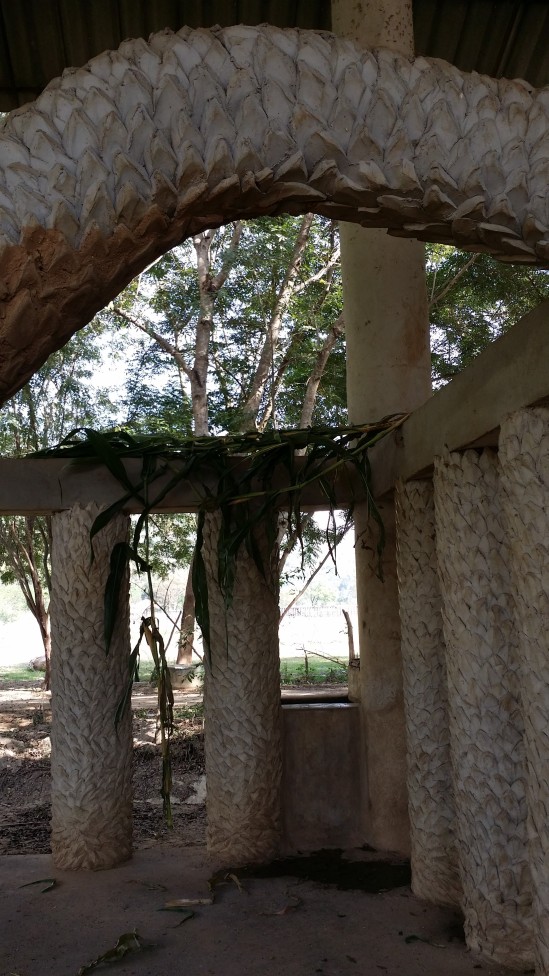 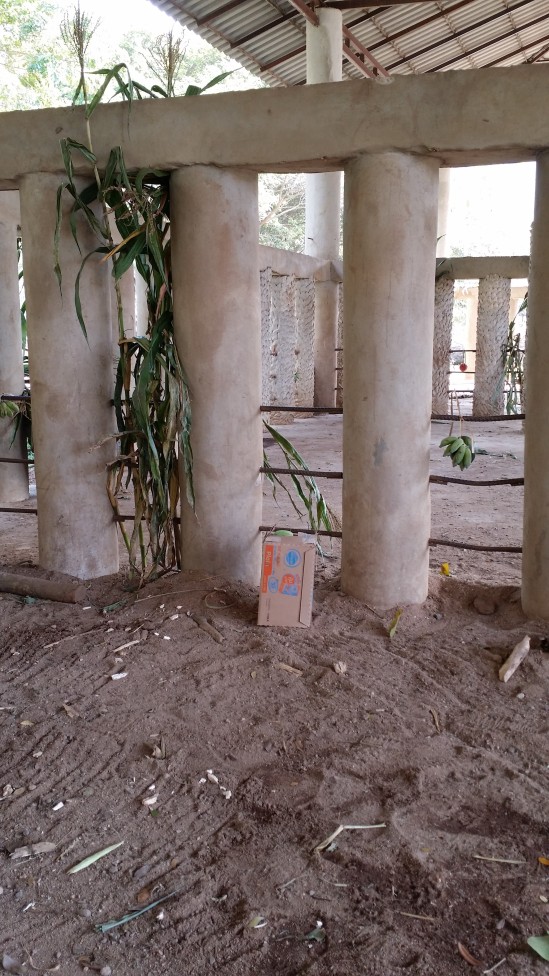 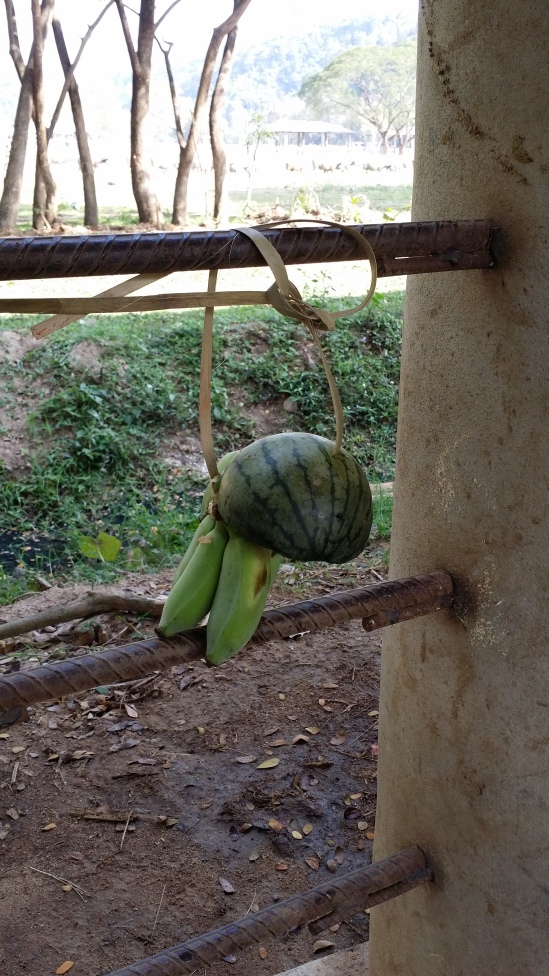 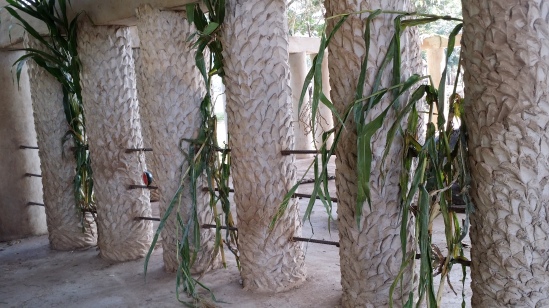 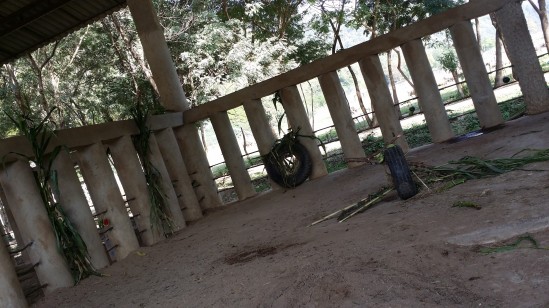 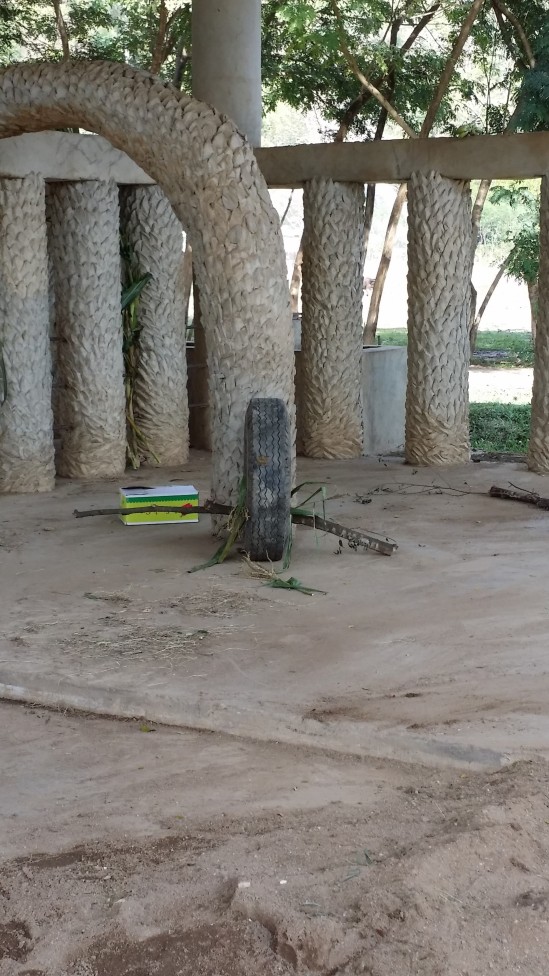 While waiting for the family herd to return, we got to visit Steel and her gimpy friends and then the dog shelter.

We return back to the family herd shelter around 4 p.m. and see that Sri Nuan, older 60’s, is already in their shelter.   We have not missed much though.  Sri Nuan delicately pokes around and eats some of the corn stalks and bananas.  A few minutes later she discovers her box.  She opens is so carefully and I am impressed.  She rummages through,very neatly, putting individual treat into her mouth – such a lady. 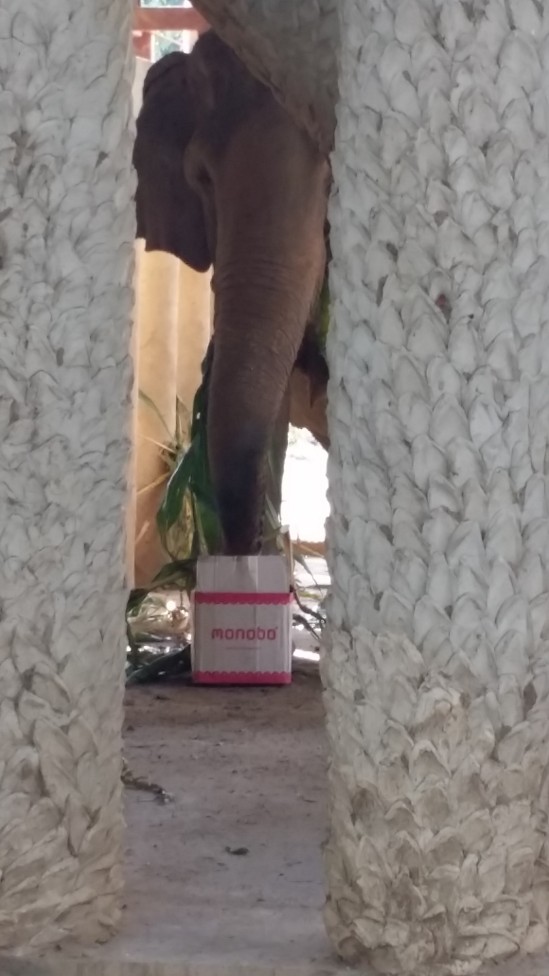 Next comes Dok Mai, Dok Ngern and nanny.  They are all a little more obvious at the eagerness of tearing into their stuff.  There is some banana stealing. 🙂 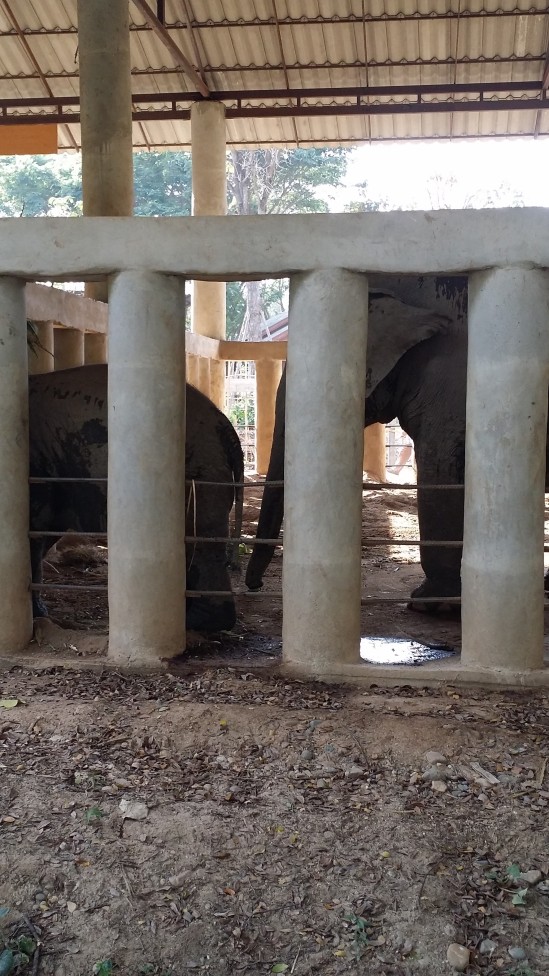 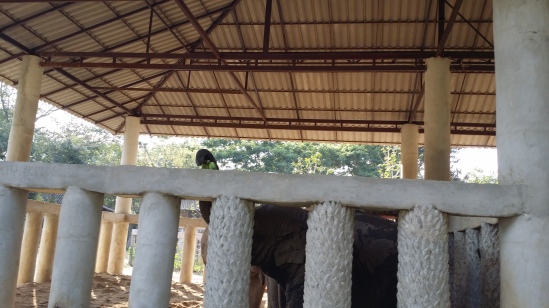 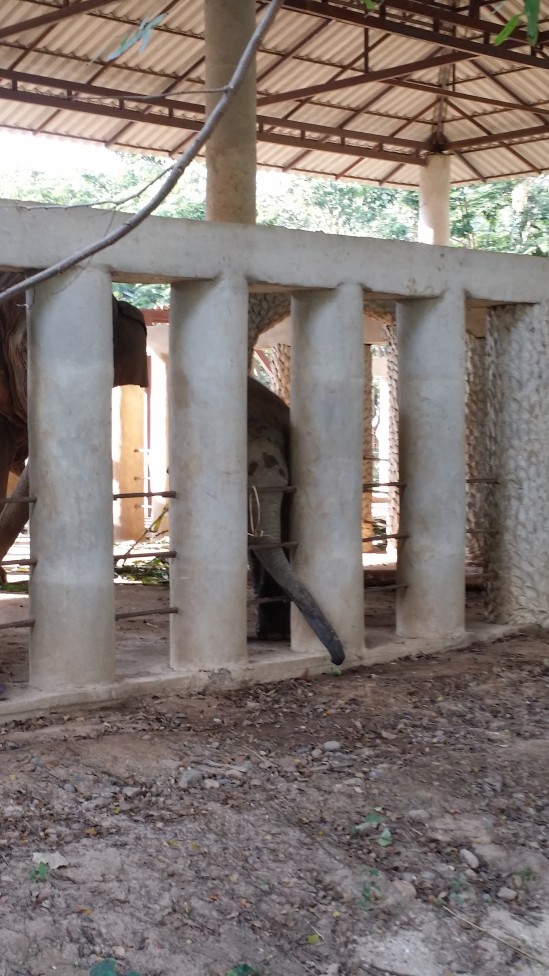 Dok Mai getting a banana that rolled out of the shelter

Here is another group returning to a different set of shelters. 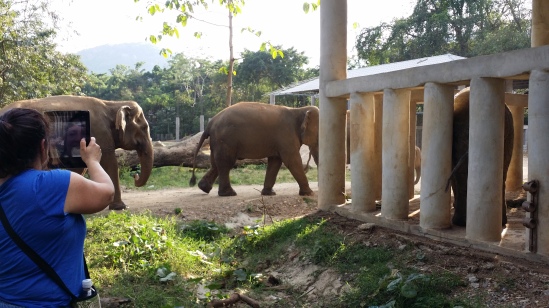 Next, Faa Mai, Tong Jan and Mae Bua Tong return into their shelter.  Mae Bua Tong’s daughters are like kids on Christmas morning.  After they have attacked their goodies, Faa Mai decides to grab Faa Sai’s box with her trunk.  Very clever! 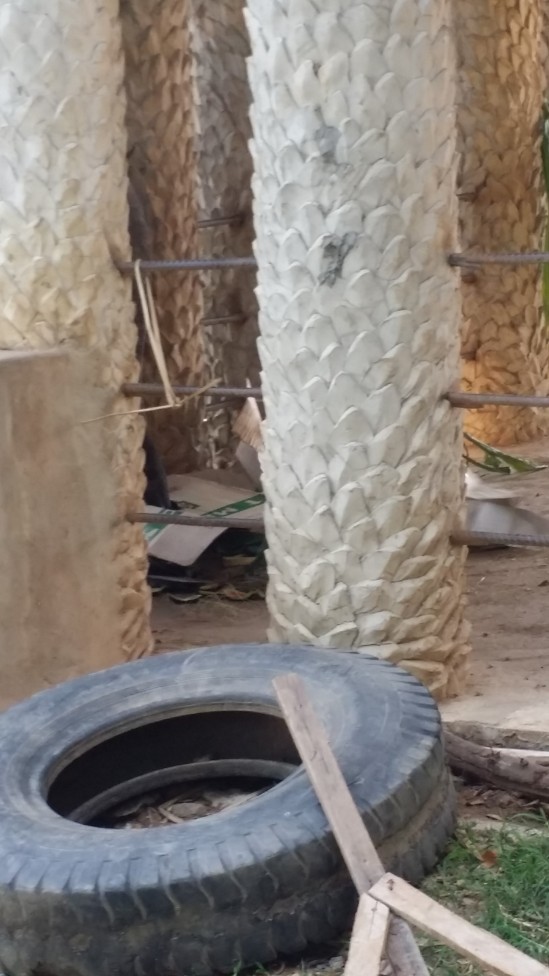 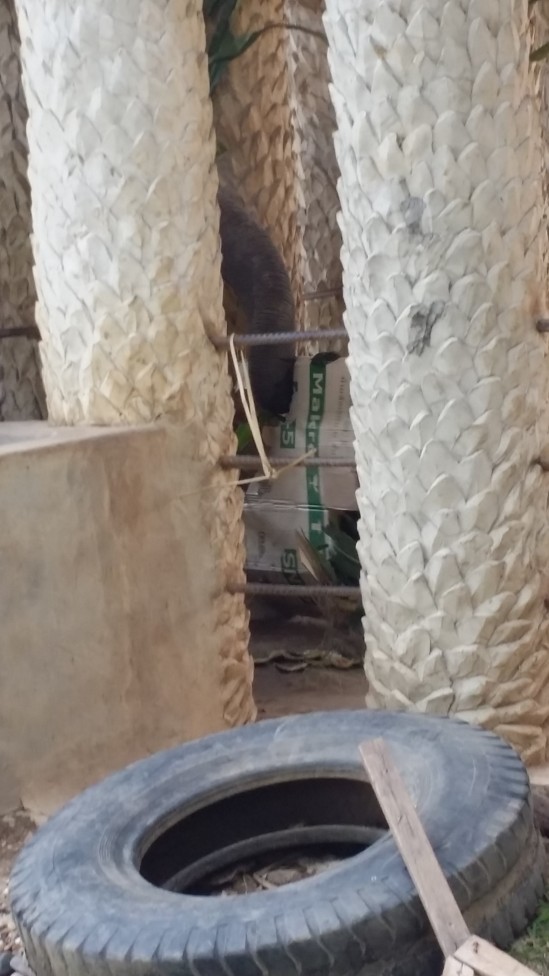 And Faa Sai has not returned yet.

Faa Sai’s untouched shelter .. aside from her surprise box which was stolen by Faa Mai! 🙂

We wonder why Faa Sai is not back as 20 more minutes go by.  Finally we see her with about 6 mahouts, including Darrick in his tractor, sort of guiding her along.  We assume she is being ‘difficult’ as Lek and Jodi mentioned she can be.  We find out later that Faa Sai wanted to meet and play with the new elephant, Sook Sai.  On her way meandering back to her enclosure, she decided to make her own route home.  She walks down the dirt road of our volunteer housing!!!  She is quite at ease with 3 mahouts and Pom to guide her the long way home back to her shelter.  Faa Sai steals some flowers and tree leaves and her guides just say, “No, no, Faa Sia” and she sort of obeys.  There is no physical reprimand of any kind on Faa Sai… 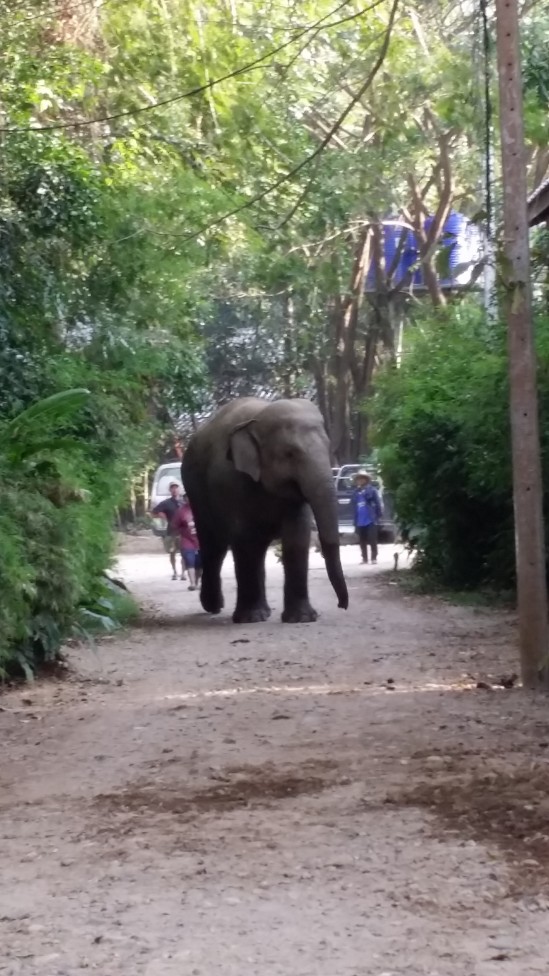 Faa Sai looking at me from our garden!

I’ll close with one of the BEST cold salads that I have had with dinner.  I must try to make something like this back home. 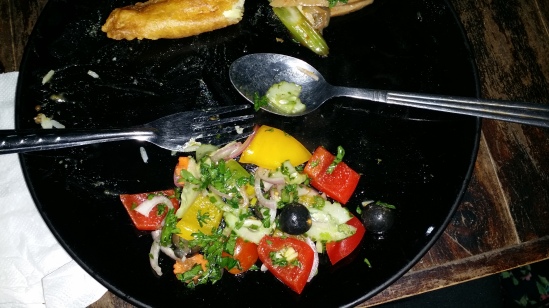