Sook Sai is having a little difficulty settling in. She took the roof down in the vet shelter. It is assumed that she is lonely and bit scared as she needs to quarantined for a few days to make sure she is not sick and cannot be integrated with the other elephants. She is not used to being kept safe. 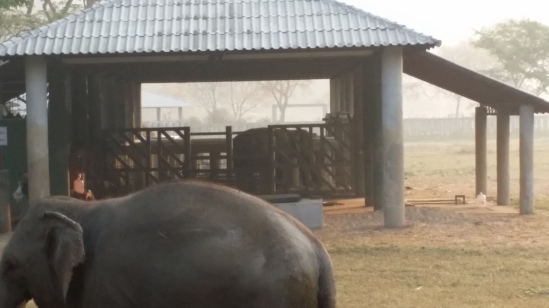 Sook Sai is in the back in the Vet Shelter

The there is this beautiful lady (in front of Sook Sai) out for her morning stroll.

This. Looking at me every morning when I eat my breakfast. Hard to resist this face. His name is Desmond but I have secretly renamed him “Fuzzy Bear”. 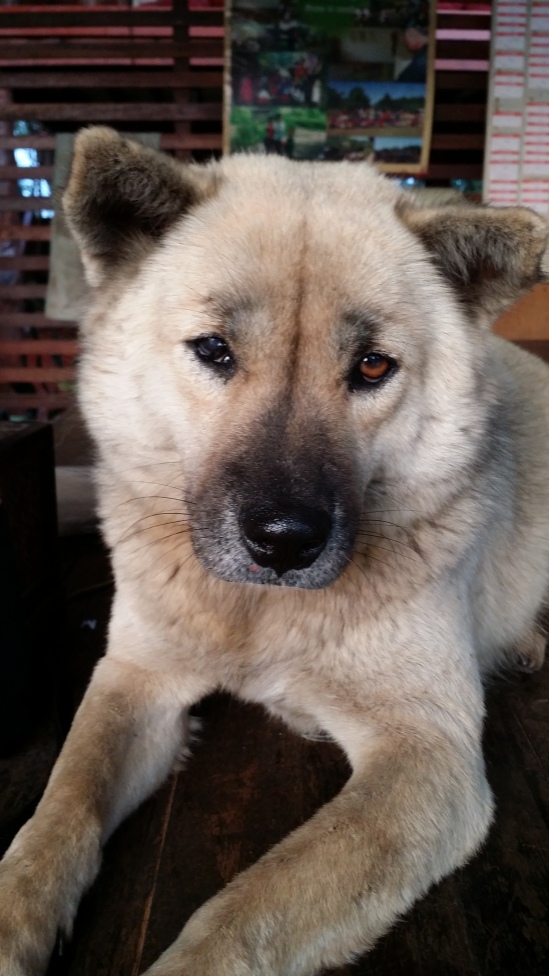 Morning chore is cleaning poop again from the elephant shelter. Actually there are too many people for poop duty (wow!) so Sabine and I did elephant kitchen instead. We washed pumpkin and watermelon — which is the size of cantaloupes.

p.s. Only Australians can wear short shorts. Sorry, no pictures to show or it would have looked “cougar”-like.

After we finished, Pom mentioned that Lek was out with the family group herd doing photos with individual volunteers. This is the first time ever that we have done this and it seemed unusual. I had a great photo with Lek! 🙂

Lek, Faa Mai above her, me. Not sure of the cutie on the left…

Faa Mai was the most possessive of Lek – in a friendly way – because she ADORES Lek. Faa Mai was born at the sanctuary and was co-mothered by Lek and Mae Bua Tong (birth mother – very attentive and loving). Faa Mai has missed Lek. She plays with her as gently as possible. 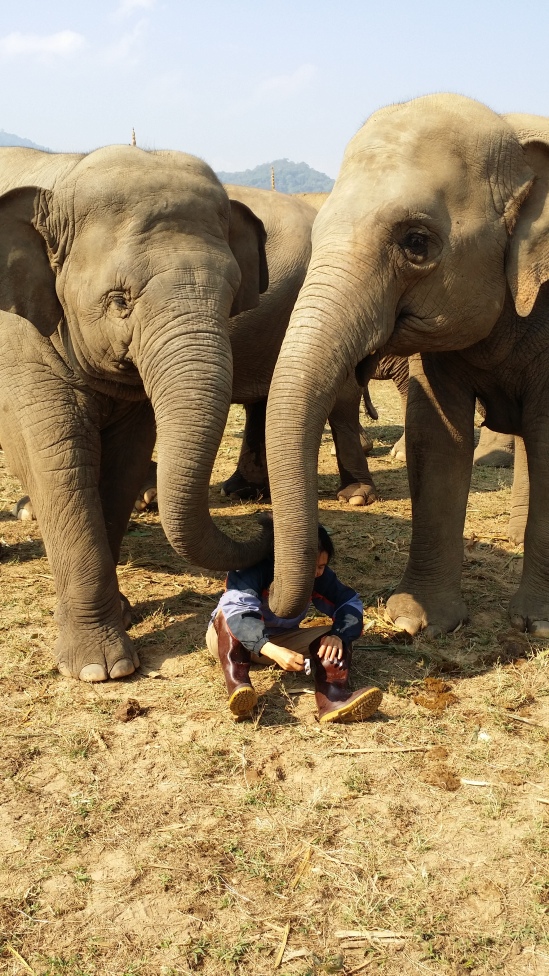 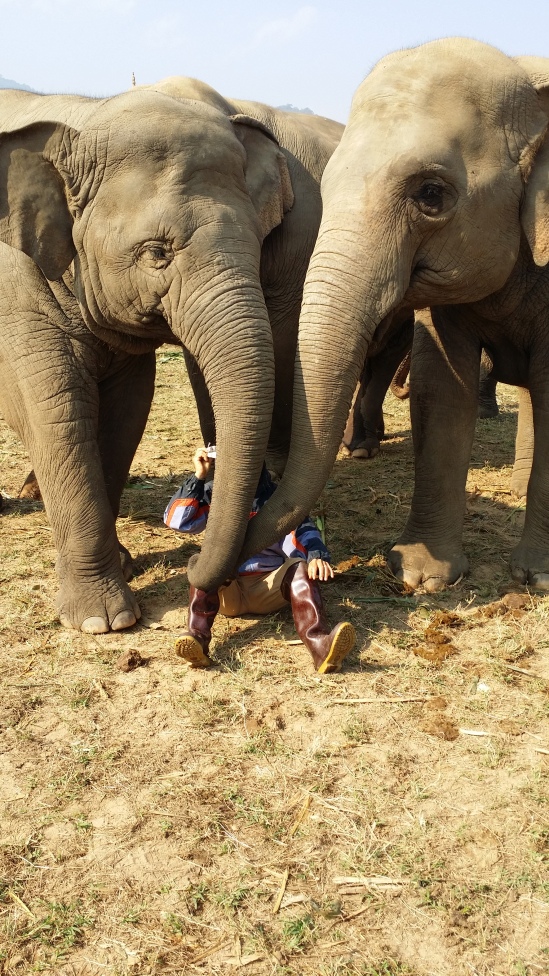 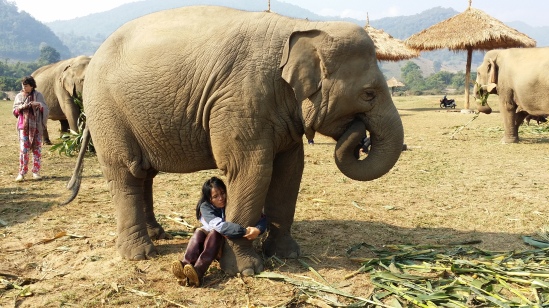 Little Dok Mai comes in for some Lek-love. Faa Mail gets a little jealous but tolerates it since she is nanny to Dok Mai. Tong Jan, older sister to Faa Mai also wants love as do Dok Ngern (Dok Mai’s mother) and the other members of the family herd.

Every where Lek walks to, the elephants follow her. It is beautiful and amazing to see.

Dok Mai having a moment with her tire.. 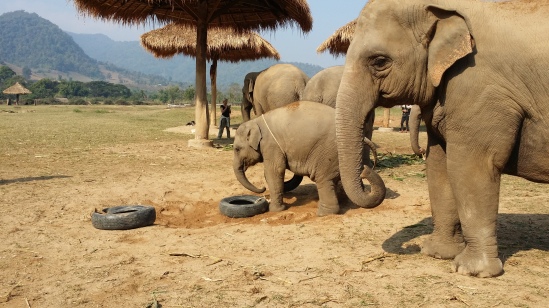 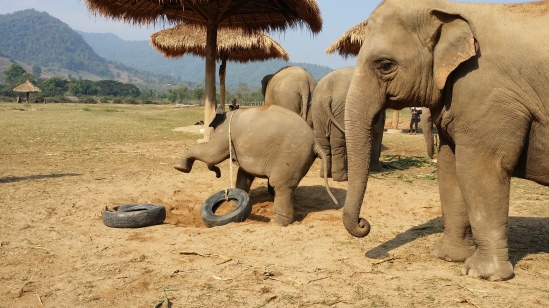 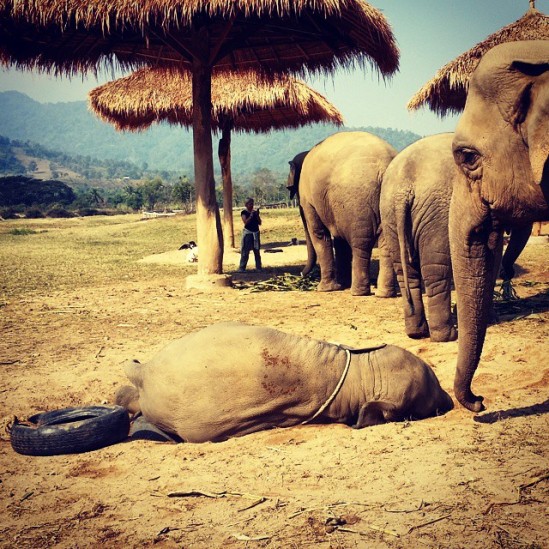 At 11:00 a.m. Lek gives a short talk in the conference room to tell us a bit about Sook Sai, the elephant that she rescued last night. It was a 24 hour drive from Surin, through the mountains where sometimes it was VERY cold and sometimes very hot… sort of like the park… Darrick, her husband, helped make sure that Sook Sai stayed warm, had water to drink and stayed calm. Sook Sai’s breaking of the vet shelter roof made her laugh and they will fix it but make the roof much higher.

She told us that the reason she was doing the photos in the field with us (and the family group herd) was NOT for us, we just benefit from it. It was to show the Thai government officials that hooks (huge, barbaric and sick-looking) and slingshots are not necessary in order to be around elephants. You DO need to be careful but beating them and breaking them into submission is not the key.

I cried when Lek said that for their old and injured elephants, this is their last home. And they will live free, with love, not pain, fear and sadness.

Her one thing she asked of us is to spread the word. Give back to ALL the animals, the respect they deserve. With our voice and the ability to connect, speak for the animals whose lives are just as important as any human life.

I LOVE everything about Lek. She mentioned that it is possible that a 2 month old ele-baby (orphaned female) may be coming to the park and that Sabine and I can meet her. She said Faa Mai will be jealous but hopefully can be a nanny to the new baby. Faa Mai is 6 years old, by the way.

After the usual delicious lunch, we said our goodbyes to the week long volunteers. It was so hard and teary. I will miss especially Helen (Aussie), Jean (Aussie) and Catherine (English); they were great companions.

Another p.s. Discovered Tim-tams, the chocolate covered chocolate creme sandwich cookie. Love them and need to bring some home for the family. Also, seaweed flavored potato chips are surprisingly delicious.

After our goodbyes: GOOD BYE!!!

…we went to Steel’s enclosure. We played with Steel and her other leg challenged friends. I thought their names were on the sign on the door of their enclosure, but I could not find it. So I have name them Gimpy 1 (Thai Pei, white short hair with brown almost beagle-ish spots)

and Gimpy 2 (Son Luk, white and brown slightly fluffier terrier-ish look). I love them all to death!

Steel was her usual love-bug self. Steel’s wheels: 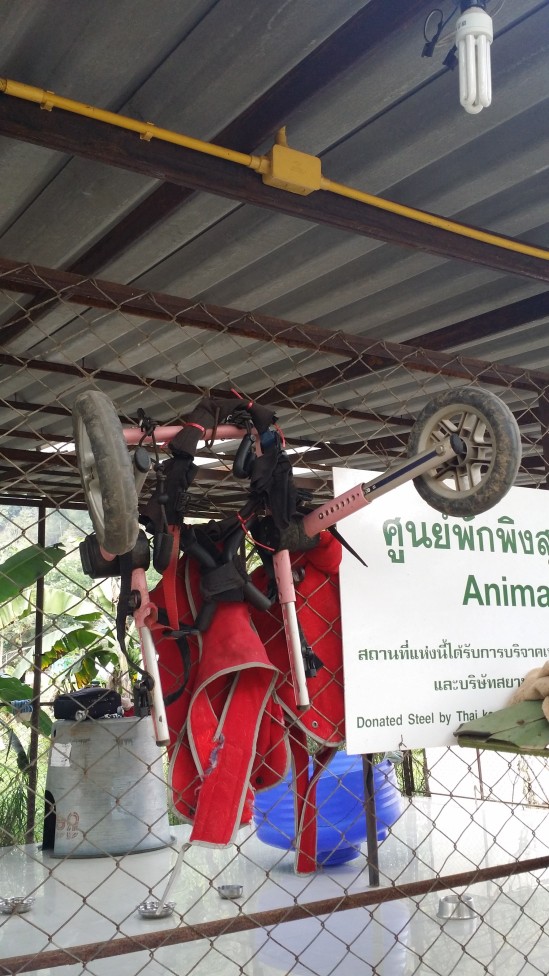 The other 2 boys were goofy and cute and Gimpy 2 was trying to hump Gimpy 1 — even though his legs just dragged. Very hilarious. When the 2 boys started to get nippy, we decided to leave. I think Steel looked apologetic for the boys’ behavior… 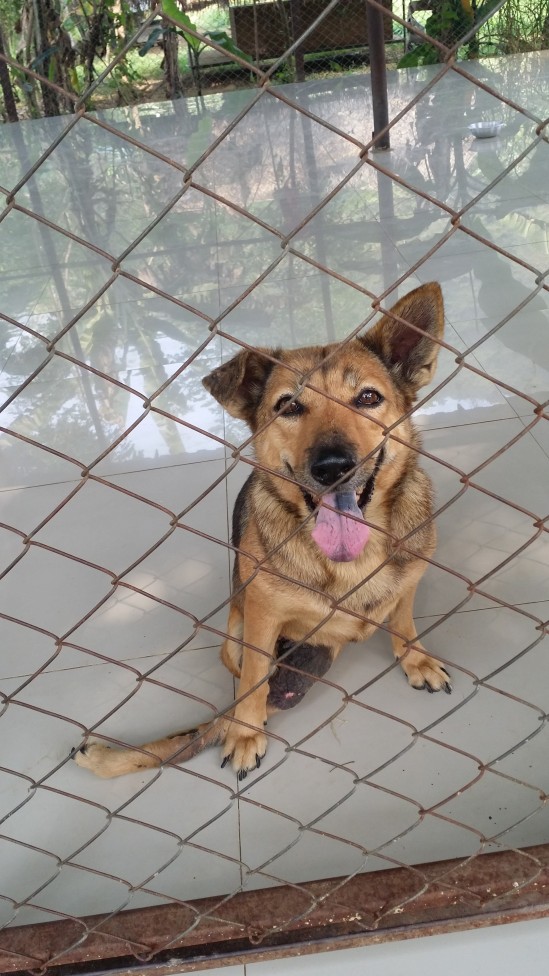 We headed over to the dog sanctuary. These guys (in only 1 of the 10 enclosures we make it to) are always so glad to see us. Look for more of their pictures in an upcoming post, “Our Furry Friends”. 🙂